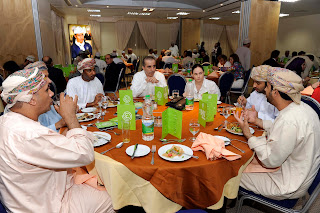 Think about the last meal you ate. Where did it come from? Chances are it traveled further to get to your plate than you have over the last few months. “Just take a look at the labels next time you go shopping, asparagus from Thailand, chicken from Brazil, milk from Saudi Arabia, bananas from the Philippines, lamb from New Zealand, the list goes on,” says Origin Oman’s Hamida Al Balushi and organizer of the recent 150 Kilometre Meal held at Knowledge Oasis Muscat.

Al Balushi argues that food production, distribution and consumption patterns have undergone a major transformation over the past 50 years. Just between 1968 and 2008, world food production increased by over 90%. “Today, we’ve identical products being shipped backwards and forwards with heavy environmental costs. Moreover, changes in our food systems have been a contributing factor in climate change,” suggests the Origin Oman Marketing Co-ordinator.

But It is not just business that is responsible for increased food production and distribution, consumers also play a major role in pushing up food kiometres. Research estimates that the average adult travels over 300 kilometres each year by car to shop for food. In fact, over a 12 month period studies show that even a small family of four emits 4.2 tonnes of CO2 from their house, 4.4 tonnes from their car and 8 tonnes from the production, processing, packaging and distribution of the food they eat.

But according to Al Balushi: “Consumers can make a difference by simply investigating where their food has come from and buying food that has been produced locally. In fact, Origin Oman’s 150 Kilometre Meal clearly illustrated that great tasting food is being produced right on our doorstep and we should be encouraging people to buy it.”

There are lots of places where you can source locally produced food – ranging from fruit and vegetable markets through to the large supermarket chains. Supermarkets are becoming increasingly aware of the demand for local produce. The Origin Oman campaign works closely with many of the large stores who have a policy of sourcing local produce wherever possible. “For instance, Carrefour, Lulu, Khimji Mart and Al Fair all heavily promote local produce and feature Origin Oman prominently in their stores,” smiles Al Balushi.

“Our research,” continues Al Balushi, “revealed that the interest in local food is not confined to the well-heeled, affluent and emerging young middle classes. Origin Oman found that more than 49 per cent of consumers would buy local food if it were more readily available and easy to find. This is fantastic news for Oman’s food and drink sector.”

“Organizing a high profile event like the 150 Kilometre Meal brings us into contact with a variety of people and organizations,” says Ibtisam Al Faruji, Origin Oman’s Marketing Director, adding: “Given the initiative’s’ success, we’re keen to forge closer ties with Oman’s catering sector, particularly hotels and restaurants who recognize the value of promoting local food on their menus. Indeed, we encourage hotels and restaurants to promote their local sourcing by publishing the names of local suppliers on their menus and websites.”

Oman Botanic Garden’s Dareen Matwani and 150 Kilometre Meal diner believes: “Choosing local food is a great way for consumers to increase the circulation of their Rials. By supporting local farmers today, you can help ensure that there will be farms in our community tomorrow, and that future generations will have access to nourishing, tasty and abundant food.”

As local food becomes an increasingly popular concept there are signs that many producers, including farmers looking to add value to their produce for perhaps the first time, believe that creating a ‘local’ product is enough to guarantee a profitable future. Sadly, this is not so and all those working in this sector must ensure that anything ‘local’ also has quality, proper provenance, traceability and, above all, good taste. “Labeling a vegetable ‘’Omani’ and selling it through a local outlet won’t ensure that it commands a premium, unless it’s produced to the correct specifications and has quality attached. A poor specimen won’t encourage repeat sales and will tarnish the special image of local food,” warns Al Faruji.

What are the Benefits of Buying Local Food?

More nutritious and better-quality food. It is easier to monitor quality and freshness of supplies by buying direct from farmers and producers. Fewer vitamins are lost the less time food is in transit and the quicker it reaches the plate. Chefs can see how animals are reared, produce is grown and items like cheese are made if they are produced near by.

Increases a sense of seasonality. If a chef buys ingredients that are grown locally, then it is going to be seasonal and, therefore, bought when the items are at their cheapest and in peak condition.

Good traceability. It is easier to monitor production and welfare standards with food that is produced just down the road. It's more difficult to carry out checks with farmers and suppliers across the other side of the world.

It's cheaper. The shorter the distance food travels, the lower the costs in aviation fuel and diesel.

Green. Transporting food long distances uses enormous quantities of fuel, which adds to pollution and global warming. Purchasing local foods is generally more sustainable than buying from countries where rainforests are being felled to plant crops.

Economically friendly. Supporting the local economy is advantageous to all parties.

Interesting, tasty products. Locally produced foods are more likely to be made by artisans who put a greater emphasis on producing food with flavour than large manufacturers, who are generally driven by profit.

Great marketing opportunity. Chefs and caterers can promote local sourcing on their menus. Tasty local items like hamour, lettuce, lobster and tomatoes are enticing to customers.
at 10:55 AM 150 comments: